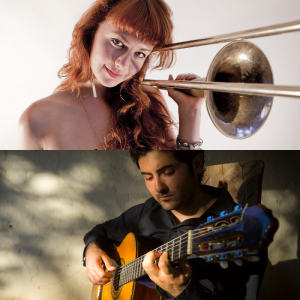 Rising stars on trombone, guitar and vocals, Brazilian and Jazz

Possessing a voice as cool and crystalline as an Alpine stream, Natalie Cressman is a rising singer/songwriter and trombonist who draws inspiration from a vast array of deep and powerful musical currents.

Ian Faquini is a Brazilian composer, guitarist, and vocalist who was born in Brasília and has lived in Berkeley, California since the age of eight. He was a member of the renowned Berkeley High School Jazz program, and at the age of 15, Ian met the legendary Brazilian composer Guinga, who became his mentor and inspired him to pursue a career in music, drawing on the rich musical traditions of his Brazilian heritage.

Ian went on to study at the California Jazz Conservatory in Berkeley and immediately after graduating joined the faculty there. He is also on the faculty at California Brazil Camp, alongside musical legends including Ivan Lins, Guinga, Chico Pinheiro, and Spok. Ian has become one of the most unique and respected guitar players in the San Francisco Bay Area, with his distinct compositional style and harmonic sense. He is also a brilliant accompanist, which has made him an in-demand collaborator with vocalists in the Bay Area and beyond.