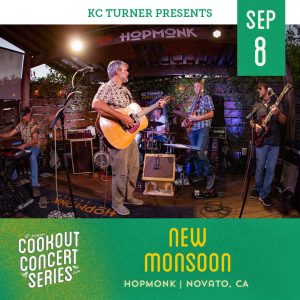 “They have a collective power that comes off as a real unified force on stage. It’s not just a band, you know? It’s something transcendental.” – Michael Shrieve (original drummer, Santana)

New Monsoon has shared the stage with heavyweight guests and are also a perennial favorite of the festival circuit including marquee festivals.

Miller and Ferlino have also recently formed a supergroup collective, The Contribution, along with Tim Carbone (Railroad Earth), Keith Moseley (String Cheese Incident), Matt Butler (Everyone Orchestra) and Sheryl Renee (Black Swan Singers). SCI Fidelity Records released Which Way World, The Contribution’s inaugural album, in 2010. Miller released his first solo album, Ancient Wisdom, in 2011. Carper performs as a solo act and as half of the duo, Bo & Lebo, with Dan Lebowitz of ALO.