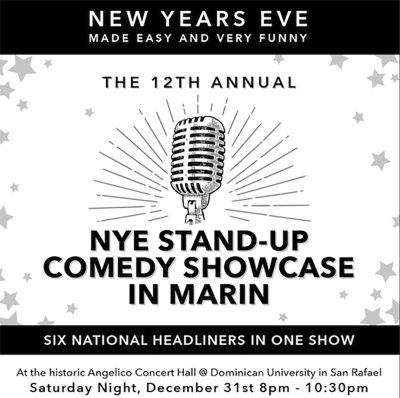 Six National Headliners in One Show

You can grab an early dinner somewhere, enjoy great stand-up comedians with friends in a theater setting includes lots of close and free parking), then have time to be wherever you wish – to ring in the new year.

Emily Catalano: A master at joke writing and deadpan delivery. Recently named “one of the top comedians to watch” in LA. Performs regularly alongside Sarah Silverman, Tig Notaro, Judd Apatow, and Patton Oswalt at the prestigious Largo Theater in Los Angeles.

Matt Donaher: A comic in the Steven Wright tradition and a veteran of Conan, Letterman, and the Comedy Channel. Winner of the Seattle Comedy Competition and recently named the top comic in Boston.

Maureen Langan: An award-winning broadcaster and comedian. Her quick wit and honest rants on life’s absurdities have made her a hot across the U.S., Canada, and the U.K. Was an on-air personality on KGO Radio for many years and now has a popular podcast called Hangin’ with Langan.

Dwayne Perkins: A classic thinking person’s comic with a critically acclaimed comedy special on Netflix in 2018. Dwayne has a deep talent for poking at real life and people’s perceptions which is not only hilarious but will make you think.

Johnny Steele: A Bay Area native, Johnny has been a comedian, radio show host, TV show host, subject of a documentary, and an SF Comedy Competition winner. A force on stage, Johnny ad-libs, and comments on the big issues of the day, from politics to modern American culture.