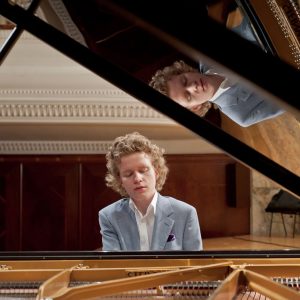 Originally from the Far East of Russia, 27-year-old Nikolay Khozyainov is a pianist of precocious and prodigious talent.

Nikolay Khozyainov is one of the most remarkable pianists of his generation. His musicality and formidable technique have thrilled audiences around the world.

Still in his twenties, his featured recitals and concerto engagements have already included sold-out performances at many of the world’s foremost stages.

Born in Blagoveshchensk, a city in the Russian Far East, Khozyainov began to play the piano at the age of five and his musical talent was discovered immediately. He moved to the capital to continue his studies and at the age of seven he made his public debut with the Handel Piano Concerto at the Great Hall of the Moscow Conservatory.

At the present time he lives in Germany where he is pursuing an Advance Degree studying at the Hannover Hochschule fur Music under the guidance of Professor Arie Vardi.

Order online or purchase at the door