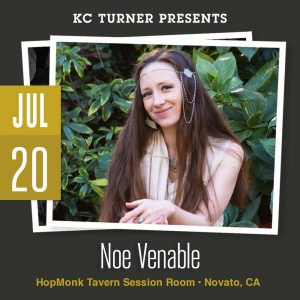 Noe’s music calls to the wildest recesses of the soul.  Her songs are intimate, with lyrics both rooted and whimsical, and arrangements that incorporate orchestral instruments, world elements, and dreamy synths.  The SF Bay Guardian wrote that Noe’s music “stuns and enraptures so thoroughly that multiple listenings are required to unravel her mysteries of music and meaning.”

As an independent artist, Noe has built a loyal following around the world.  She has toured nationally with Ani Di Franco and many other well-known artists, seen her songs featured in film, appeared on national television, and been nominated for several awards, for both singing and songwriting.  Her ethereal soprano voice can be heard on releases by Ani DiFranco and Vienna Teng, who also covered Noe’s song, Midsummer Night’s Dream.

A multi-instrumentalist, Noe plays guitar, mountain dulcimer, piano, and celtic harp.  To capture a vibe of intimacy, she does most of her recording at home.

She is currently at work on a new album.

Also a teacher, Noe loves helping others come into their voices and gifts.