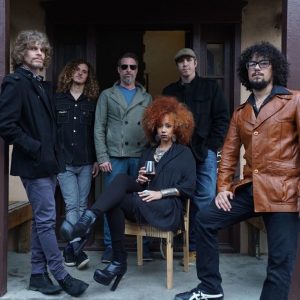 “California Soul” comes to Sweetwater, with a live show that captivates audiences and packs dance floors

However, since late 2013, Rios and Hastie have been joined by Dale Jennings (bass), Sam Halterman (drums), and singer/lyricist Adryon de León to form a permanent nucleus.

Starting in the mid 1990s ORGŌNE cut their teeth on instrumental pioneers from the late 60s and early 70s like The Meters and Cymande.  Alternatively, their new album Reasons looks toward the late 70s and early 80s for its sonic palette. Hastie’s synth lines evoke Bernie Worrell in the Talking Heads and the rest of the rhythm section lays down a foundation built from the likes of Prince, afro-disco icon Kiki Gyan, The Cars, and more.