Origins of American Tattoo: “Lew the Jew” and His Circle 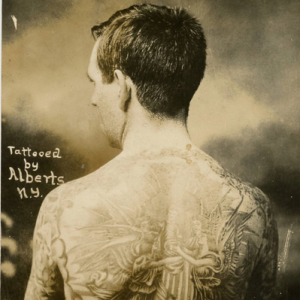 This presentation by docent Lisa Rosenberg will explore the work of Albert “Lew the Jew” Morton Kurtzman, one of the most influential artists of early American tattoo.

Don Ed Hardy is one of San Francisco’s treasures—an artist, a legendary retired tattoo designer, an expert on the history of tattooing, and a writer, curator and publisher of many books on tattoo and related topics. He has published a book titled “Lew the Jew” Alberts: Early 20th Century Tattoo Drawings, and this exhibition is inspired by that book.

“Lew the Jew,” born Albert Morton Kurzman (1880–1954), was a New Yorker at the turn of the last century who had fought in the Spanish American War, and learned tattooing in the Philippines. When he returned, he became part of the emerging tattoo industry in the New York area, and one of the earliest developers of flash, the samples used in tattoo shops.

Alberts was in the close-knit group of the most prominent American tattoo artists of the first quarter of the twentieth century, who stayed in close communication despite being spread across the country. This correspondence, containing iconic examples of American flash, are significant early records of tattoo history that show how these artists influenced each other’s styles.