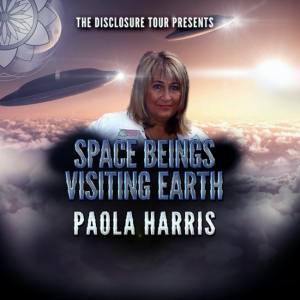 Investigative Journalist Paola Harris will share her research about the more intriguing and mysterious type of reported aliens — the ones who appear to be humans, or at least of a human-like species, dating back to the 1950’s and 60’s

The various anti-nuclear messages and sitings over our nuclear installations lend a clue to why these people have decided to warn our Earthly population.

One of the questions being asked is how many different extraterrestrial species and human looking ETS s are currently visiting planet Earth?

Recent estimates state there are around 57 different kinds of extraterrestrial species. Some of these 57 species are very similar to us in appearance. Paola Harris will share her knowledge and international research of current human type extraterrestrial cultures, and current Latin American research.

What You Will Learn…