Presented by Marin Onstage at The Belrose, San Rafael CA 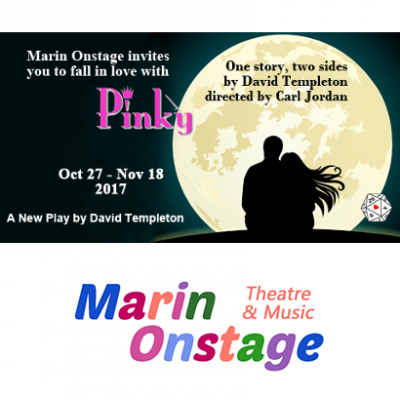 A new play by David Templeton, directed by Carl Jordan

Pinky (Melissa Claire) has never forgotten the day her best friend David (Jeffrey Weissman / Larry Williams) wrecked their friendship when he told her he loved her. He was sixteen. She was fifteen. And that was a long time ago.

Playwright David Templeton weaves a heart warming story of a nerdy, dungeons & dragons-playing teenager attempting to sweep the girl of his dreams off her feet, while she stays firm in her resolve to wait for her Prince Charming. David’s version involves goblins, sword-fights, treasure hunts and rescues. Pinky’s version follows advice from her Aunt Emily: “Never settle for second best!” and is totally different. One Story. Two sides.

Carl Jordan is known for his innovative directing style and flair for creating magical characters. He directed “Noises Off” and “Avenue Q” with Novato Theater Company, “[title of show]” and “Venus in Fur” with Marin Onstage.

Melissa Claire won the Bay Area Critics “Best Actress” award for her role in “Venus in Fur” with Marin Onstage in 2016.

Jeffrey Weissman is known for his film roles in “Back to the Future” (II and III) and “Corked”.

Larry Williams is known for his stage work in “Peter and the Starcatcher” and “Baskerville” at Spreckels Theatre.