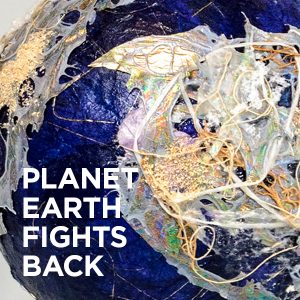 In Thelen’s art, “planet earth” has a voice. This exhibition of recent work depicts environmental disasters that threaten our planet. Her three-dimensional sculptures decry the consequences of climate change, overpopulation, mineral exploitation, pollution and more.

Some globes teeter on screws alluding to mankind’s harmful intervention. Her hammer-mounted globes come alive with a first-person narrative that warns of the earth’s power to fight back. Thelen’s abstract encaustic wall-works depict her emotional response elicited by humanity’s abusive practices.

To ensure a comfortable visit we are reinstating capacity limits until further notice. To visit this exhibition please schedule your preferred day and time.

Phyllis Thelen is an experimental artist creating sculptural forms out of organic materials. She received her B.A. in Art from Connecticut College, and continued her education at the Art Institute of San Francisco, Dominican University of California, and the Miasa Bunka Center in Japan, where she studied with Toshi Yoshida. Thelen received an honorary Ph.D. from Dominican University in 2002.

Thelen’s work has been featured in solo exhibitions at the San Luis Obispo Museum of Art and Morris Graves Museum of Art. She was a featured artist in a group show at Arts Benicia, juried by Lawrence Rinder of the Berkeley Art Museum. Additional exhibitions include the Quilt and Textile Museums of San Jose, CA, the Napa Valley Museum, the Gallery Strasse in Japan, the Presidio of San Francisco, Dominican University, Falkirk Cultural Center, and Art Works Downtown in San Rafael, CA.

Thelen is a Founder of Art Works Downtown, the Marin Ballet Association, and Youth in Arts. She chaired the San Rafael Cultural Affairs Commission, and has been listed in Who’s Who of American Women. In 2010 she received the Cultural Treasure Award from the Marin Cultural Services Commission.

To ensure a comfortable visit we are reinstating capacity limits until further notice. To visit this exhibition please schedule your preferred day and time. 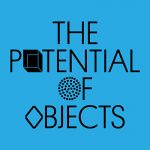 The Potential Of Objects 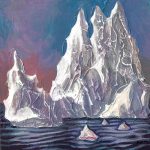 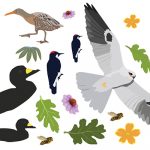 Elisheva Biernoff: The Tools Are in Your Hands