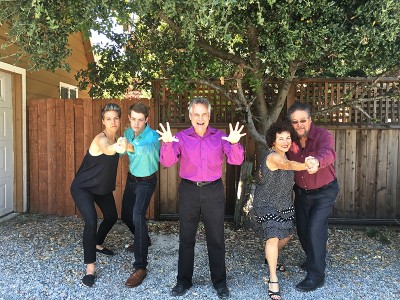 Debuting as a “semi-staged concert performance” with five singers and
a narrator, “Plutocracy” imagines what happens when the head of a global
oil corporation dies and, to everyone’s surprise, leaves control of the company
to his young hippy poet son–with a powerful CEO uncle determined to stop
the boy.  “Plutocracy” takes on money in politics, racism, inequality, global warming, the fate of the earth — phew! –in catchy songs that are witty, playful, and moving.

Polissar’s previous musical satirizing the George Bush administration,
“By George, It’s War!” got standing ovations at the Throckmorton Theatre and
other Marin and Berkeley venues.  He wrote, produced and directed this current work.

Polissar studied composing at Stanford, has had choral works
performed by major choruses, and plays clarinet professionally with such
artists as pianist Si Perkoff and guitarist Bart Hopkin.  He has written and
produced three political musicals, and proudly states that “in addition to
musical honors, my resume includes three arrests for civil disobedience”.

About “Plutocracy” Polissar says, “It touches on many contemporary
issues, but above all I hope it is engaging and entertaining–in the great
tradition of American musicals–with songs that are sometimes fun,
sometimes very moving.”