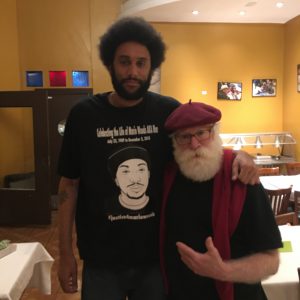 An evening of poetry, with food and drink, with Tongo Eisen-Martin, Isabelle Khoo-Miller, and guests.

Tongo Eisen-Martin is a native born San Franciscan, and received his MA from Columbia University.

He is the author of Heaven Is All Goodbyes (City Lights, 2017) and someone’s dead already (Bootstrap Press, 2015), which was nominated for a California Book Award.

He has also received the prestigious Griffin Poetry Prize 2018.

“[Eisen-Martin] makes spare, efficient, wild-eyed jazz…rubs mud and accountability into the pores of the zeros and ones in the glass and steel city. Throughout SOMEONE’S DEAD ALREADY, I return to the wonder of the writer’s economy of language, how deftly the words infuse their amulet casings with blood temperature at the edge of boiling. This work is as hungry as revolution, a necessary, deadly still in these shifting times…”
– Marc Bamuthi Joseph

Isabelle Khoo-Miller is a poet and student dedicated to social justice. Isabelle’s own identity as a queer Chinese-Mexican-Jewish woman inspires her social work to establish intersectional and inclusive actions and conversations.