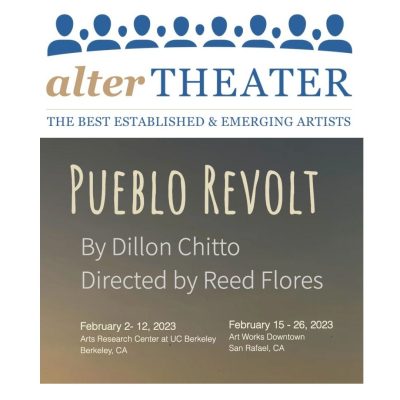 A prodigal son returns to the reservation, and his business proposal sparks a heated debate

Pueblo Revolt explores the Pueblo Uprising through the eyes of a gay Pueblo teen, Feem, and his older brother, Ba’homa. Equally hilarious and poignant, the play weaves together history and Indigifuturism to examine queerness, family, religion, and survival.

“Initially, I was really connected to the character of Feem,” says Reed Flores, who will direct the project. “I’m also a Queer younger brother. But, as I kept rereading this play, I was really drawn to the language. A majority of the dialogue of this play is created in a sort of modern realism, how we talk today — but then there are parts that lean into magic, into poetry, and those are the parts that really transport me to a different place.”

Note: In the Before Times, our regular price was $35. If you can afford to pay more, we invite you to make a donation on top of your ticket price.