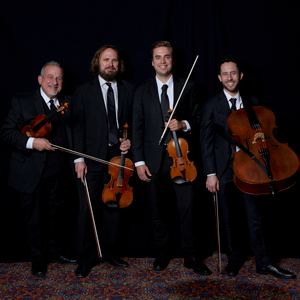 Join us for a concert by  Quartet San Francisco, a non-traditional and eclectic string quartet led by violinist Jeremy Cohen, for an evening full of virtuosic string playing, story-telling and deep grooves.

Quartet San Francisco has toured Italy, China, South Korea, Japan, Turkey, and Guam, performing in Cremona, Foggia, Seoul, Tokyo, Hyogo, Sanda, Istanbul, Hagatna, and throughout central and eastern China. As winners of the Argentine Consulate’s International Tango Competition in New York, they performed tangos for an Argentine audience at the historic Café Tortoni in Buenos Aires. In 2018 they performed the opening concert for the Cremona Music Festival in northern Italy and their CD release, A QSF Journey, reached the #1position in Amazon’s new chamber music releases.

U.S. appearances include New York’s Le Poisson Rouge, Yoshi’s Jazz Clubs in San Francisco and Oakland, the Brubeck Room in the Wilton Library (at the invitation of Dave Brubeck), the Mendocino Music Festival, in concerts with the Marin Symphony, the Peninsula Symphony, and the Tulsa Symphony, and guest appearances with numerous chamber orchestras. 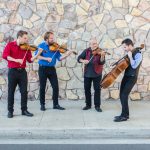 Download a map with driving instructions from San Francisco, San Rafael, or the East Bay
Download a map from Santa Rosa, Petaluma, and Vallejo

MORE FROM The New School at Commonweal 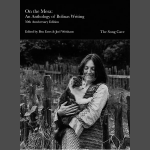 LOCAL>> On the Mesa – An anniversary celebration of Bolinas writing