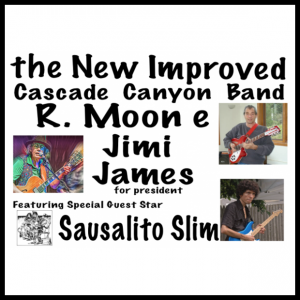 R. Moon e: rock and ballads some fusion work and of course the blues which is where i started 5+ decades ago as former lead guitarist and vocalist with the New Improved Jook Savages.

We were a 60’s band played many of the acid tests with the Dead, played the Fillmore etc. back then and other venues.

Have recently come back to live performance and am working w Jimi James an exceptional guitarist and singer as well as song writer plays many venues around the bay including the Sausalito Blues Festival where Jimi headlined one of the Friday night concerts. He also has played with John Lee Hooker and many bands in the area

And the exceptional energy of Sausalito Slim you have to experience it to believe it he’s great.

On drums we have Bill Bowen original drummer with the Sons of Champlin with whom i’ve worked for 40 years.

And on bass Bob Keast who also plays with Firewheel and other groups around the Bay.