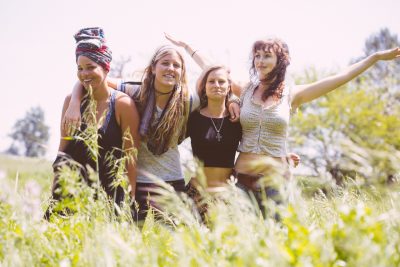 Rainbow Girls formed in the bottom of a radioactive crater. The first two colors to explode grinning from the mud were Red and Yellow, who soon realized that in order to fulfill their destiny, they needed to find the rest of the colors and join together to create an Electric All-Lady Stomp-Folk Grand Band.Green was discovered practicing voodoo in a barn in Carpinteria, while Violet was drawn to the harmonious, soul lifting shrieks of a particularly festive Monday night ritual known as BEAN NIGHT. The four immediately took off on a gust of wind to Joshua Tree and Big Bear Mountain, and traveled through Europe by the skin of their teeth, couchsurfing, playing music on the streets, staying in art squats and getting deported from London. When they returned, bursting with rock but lacking a drummer, Blue, carrying an entire drum kit around her body like a huge metal cloak, trampolined forth from inside a stand at the Farmers Market and Rainbow Girls was formed.