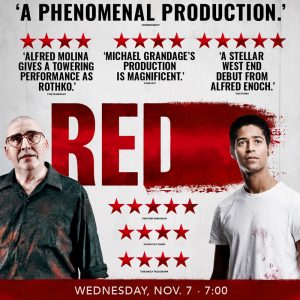 Alfred Molina and Alfred Enoch (How to Get Away with Murder) star in the first UK revival of John Logan’s play, which first opened in 2009 and, following a transfer to Broadway, went on to win six Tony Awards, including Best Play.

Filmed live this year under returning director Michael Grandage, the play stars Molina as American abstract expressionist painter Mark Rothko and Enoch as his young assistant Ken, as they face Rothko’s toughest challenge to date, in what one critic called “a tense and occasionally ferocious exploration of the price of making art.”