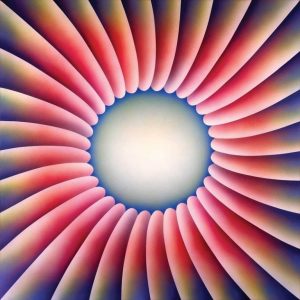 The Fine Arts Museums of San Francisco and the DeYoung celebrate pioneering feminist artist Judy Chicago with a retrospective spanning from her early engagement with the Californian Light and Space Movement in the 1960s to her current body of work, a searing investigation of mortality and environmental devastation, begun in 2015.

The exhibition includes around 150 works and related archival material that chart the boundary-pushing path of the artist named Cohen by birth and Gerowitz by marriage, who, after trying to fit into the patriarchal structure of the Los Angeles art world, decided to change her name and the course of history.

Organized on the heels of the fortieth anniversary of The Dinner Party’s first San Francisco presentation and opening in conjunction with the 100th anniversary of women’s right to vote across the United States, Judy Chicago: A Retrospective pays homage to an artist whose lifelong fight against the suppression and erasure of women’s creativity has finally come full circle. ​