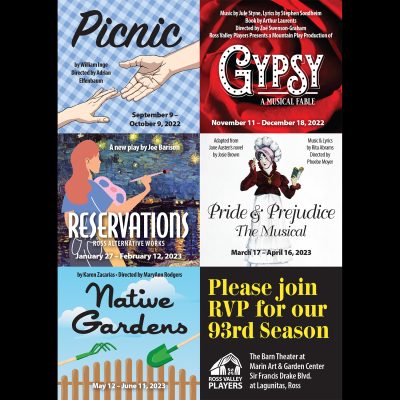 Here’s the new season, five plays from September through June!

$126 for a five-show season—four major productions and one RAW production.

Buzz at the Barn first Saturday performance (except for Gypsy), includes refreshments before the show for ticket holders.

PICNIC by William Inge, Directed by Adrian Elfenbaum
The animal vitality of a young man upsets the female atmosphere of a Labor Day picnic.
September 9, 2022 to October 9, 2022
*Please note there is no performance Friday, September 16, 2022*

GYPSY by Arthur Laurents, Directed by Zoë Swanson-Graham
The mother of all musicals!  A Mountain Play production presented by Ross Valley Players.
November 11, 2022 to December 18, 2022

NATIVE GARDENS by Karen Zacarías, Directed by MaryAnn Rodgers
Gardens and cultures clash, turning friendly neighbors into feuding enemies in this hilarious comedy of good intentions and bad manners.
May 12, 2023 to June 11, 2023 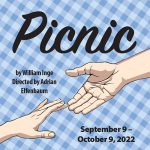