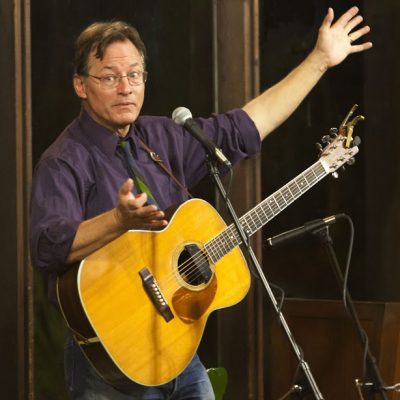 A masterful acoustic guitarist and expressive vocalist, Zimmerman performs crafty parodies and soulful ballads drawn from current events as he takes the audience on a tour of today’s rocky political landscape. It’s a wild ride, both entertaining and uplifting.

Roy delivers the news of the day as no paper or podcast can. Quirky, hilarious, poignant, and honest, with guitar rhythms you shake your foot to and lyrics you shake your head at. Informed by cross-country travels with his wife and co-writer, Melanie Harby, and with a clear eye on how Washington works, Roy sings it like it is–and inspires us to work for what could be.

Roy’s songs have been heard on HBO and Showtime. He has shared stages with Bill Maher, Robin Williams, Ellen DeGeneres, John Oliver, Kate Clinton and George Carlin. He’s been profiled on NPR’s “All Things Considered” and is a featured blogger for the Huffington Post.