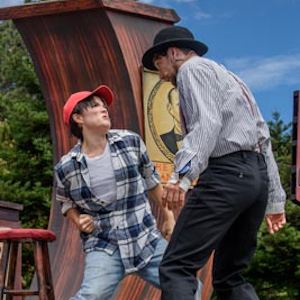 It’s Election Night 2018 and Bob swears she’ll never vote again. A lifetime of fading fortunes made this former Obama voter take a chance on the new guy promising change-Donald J. Trump. But it’s two years into his presidency and Bob’s still waiting to start winning. Tonight she’s telling everyone in her small-town bar that all politicians are liars, the system is rigged, and nothing’s ever gonna change.

Along comes a mysterious stranger with an intriguing offer. He’ll show her an America where working people come together to demand a brighter future, where socialism isn’t a dirty word. He’ll take her all the way … to 1912.

Bob soon finds herself traveling back to a time when the Socialist Party was winning millions of American votes; uncovering a hidden history and realizing that she may have more in common with those pesky progressives on the coasts.

She begins to ask: what will it take to get people to stop voting against their interests? How do we overcome the divide-and-conquer tactics that keep us all down? When did our electoral choices get so limited? And isn’t it time to get off the swinging pendulum that’s left us at our current impasse?