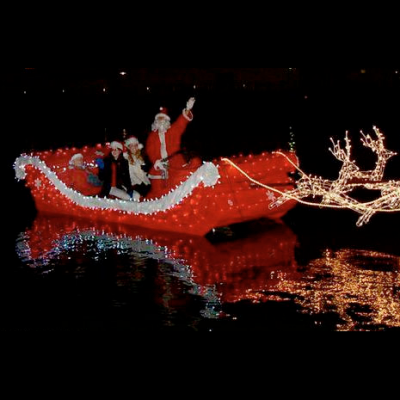 The turning basin is in front of San Rafael Yacht Club.

Four yacht clubs come together to create a holiday spectacle seen along the banks of San Rafael Creek from these locations:

San Rafael Canal lights up with nearly 100 boats and yachts illuminating the water with flashing, dancing lights in the shapes of dolphins, buildings and everything under the sun that can be portrayed with small lights. The 6 p.m. launch of the parade features a grand entrance with Santa and his reindeer and the San Rafael Police.

The parade started as separate celebrations organized by the three major yacht clubs in San Rafael in the 1960s with only a handful (8-10) boats. 8 turned into 80 boats and traffic jammed the highway. Boats often come from  Vallejo, Sausalito, Emeryville, Antioch, San Francisco and Bay Area marinas and yacht clubs.

Event planners claim this is the third largest Lighted Boat Parade in the country. Action Marine says it is one of the largest boat parades in the Bay Area, which is more likely. Free to see, dress warm and have fun!