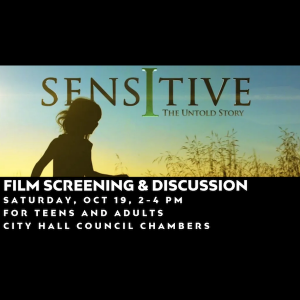 Film Screening and Discussion about innate trait of high sensitivity

Join our friends from Heart and Mind Equine for a movie screening of the documentary, Sensitive: The Untold Story, followed by a discussion.

In 1991, Dr. Elaine Aron made a breakthrough discovery: an innate trait of high sensitivity. Since then, her international bestseller The Highly Sensitive Person has been translated into 18 languages and her research is published in top-tier peer reviewed journals such as The Journal of Personality and Social Psychology and Brain and Behavior, as well as replicated and extended by other scientists, who are interviewed in the film.

There are now fMRI and genetic studies on the subject. Dr. Aron found that not only 1 in 5 people are highly sensitive, but the trait occurs in the same percentage in over 100 other species.