Shakespeare's The Merry Wives of Windsor 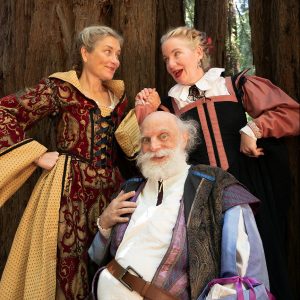 The Curtain Theatre is celebrating its 20th year of performances in Old Mill Park by returning to one of Shakespeare‘s best-loved works, “The Merry Wives of Windsor.”

The adjectives “knockabout” and “madcap” are often associated with “Merry Wives,” and rightly so for one of Shakespeare’s silliest plays. But this comedy also resonates strongly these days, offering some #timesup-style retribution as women turn the tables on the men.

Sir John Falstaff, tavern bad boy and lord of misrule (seen last summer in the Curtain’s “Henry IV, Part 1”), meets his match when he tries to simultaneously woo two housewives in suburban Windsor. And he is not alone; the canny women bring all manner of jealous, hot-headed, pompous and misguided men firmly to their senses. Love and common sense triumph, as does the maxim that “wives may be merry, and yet honest too.”

This year’s production is directed by Kim Bromley, who led the Curtain’s rendering of “The Miser” two years ago. The set is once again the work of Steve Coleman, whose magical designs exploit the natural beauty of the Curtain’s unique amphitheater in the redwoods. Steve Beecroft returns as producer, choreographer and actor. Don Clark leads a four-piece acoustic band, again sharing composing duties with Hal Hughes. Kathy Kingman-Solum designed costumes, based on an early 17th century motif.

The Curtain Theatre is dedicated to putting on the world’s best plays in one of the Bay Area’s most beautiful settings. Its free outdoor productions in Old Mill Park are designed for first-time viewers as well as long-time theatre buffs. The shows rely heavily on music and dance, supported by instruments that include fiddle, concertina, accordion, whistle and guitar.