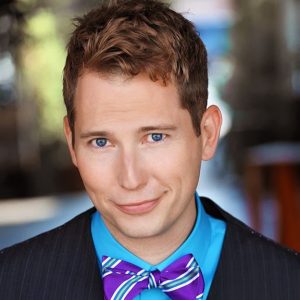 Shawn Ryan, semi-finalist from NBCs Americas Got Talent returns from Los Angeles to headline at George’s Nightclub with an ALL NEW SHOW!

From his gender bending turn on Women’s Murder Club to his GLAAD Nominated role on The Mentalist, Shawn’s showbiz life gives his audiences a musical romp through tinsel town.

Shawn Ryan is one of the rising stars performing jazz and standards today with comedic flair – having what the Times calls  “a charm that is rare!”

After placing in the semi-finals of NBC’s 2006 Summer hit, America’s Got Talent, Shawn’s star continues to ascend. He currently has two albums and numerous national TV appearances. His most recent was on CBS The Mentalist (GLAAD Nomination) as well as taking on the gender bending role of Karen Adams in ABC’s Women’s Murder Club.

Shawn has also been featured on LOGO TV’s One Night Stand Up and NBC’s Life! Shawn is the co-founder of The Young Actors Theatre Camp along with his partner of 11 years, John Ainsworth.