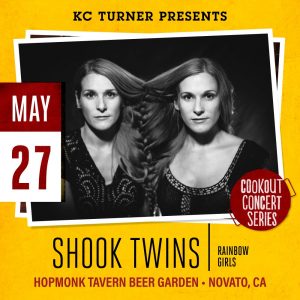 Magic revolves around the number two. Opposite halves define our existence. There’s dark and light, black and white, night and day, yin-and-yang, and so on and so forth.

On their 2017 EP 2, critically acclaimed Idaho-born and Portland-based indie outfit Shook Twins draw on the inherent power of the group’s namesake duo—identical twin sisters Katelyn Shook [vocals, guitar] and Laurie Shook [banjo, vocals]. In early 2017, the pair holed up alone in a room with just two voices and two instruments and cut the seven-song collection live to tape, serving up bare bones renditions of fan favorites, covers, and one new tune.

The process represents something of a full circle moment for Shook Twins. The group emerged in 2008 with their independent debut You Can Have The Rest followed by Window and 2014’s What We Do—which garnered acclaim from USA Today and more. Along the way, the full band, including Niko Slice [electric guitar, mandolin, vocals], Barra Brown [drums, vocals, drum pad], and Josh Simon [bass, vocals, electric guitar, synth], has shared bills with everyone from Ryan Adams to The Indigo Girls. Their artful amalgam of folk heart, indie spirit, and alternative energy has effectively captivated fans internationally.

Rainbow Girls is a collaborative of songwriters, multi-instrumentalists, vocalists, and California natives who’ve spent the last 4 years touring Europe and the US as a rock n’ roll band, but who’ve recently returned to their folkier roots by embarking on a house concert tour across America. This new trio version of the band (Erin Chapin, Caitlin Gowdey & Vanessa May) highlights their rich harmonies, ageless songwriting, and soulful, bluesy sound at its rawest form. 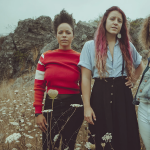 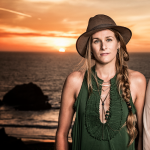