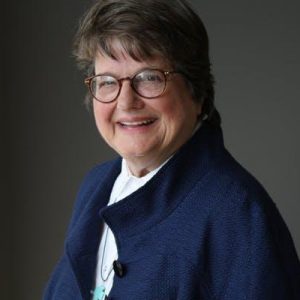 Co-Sponsored by Death Penalty Focus • In Conversation with Mike Farrell

Sister Helen writes about the relationships with friends, fellow nuns, and mentors who have shaped her over the years.

In this honest and fiercely open account, she writes about her close friendship with a priest, intent on marrying her, that challenged her vocation in the “new territory of the heart.”

The final page of River of Fire ends with the opening page of Dead Man Walking, when she was first invited to correspond with a man on Louisiana’s death row.

“Prejean chronicles the compelling, sometimes-difficult journey to the heart of her soul and faith with wit, honesty, and intelligence. A refreshingly intimate memoir of a life in faith.” —Kirkus Reviews

Sister Helen Prejean, CSJ, a member of the Congregation of St. Joseph, is known worldwide for starting a dialogue on the death penalty. After witnessing the electrocution of a condemned man in a Louisiana prison in 1984, Prejean wrote the bestselling Dead Man Walking and set out, through storytelling, to bring citizens close to the hard realities of government killings.

President of the Board of Death Penalty Focus, Mike Farrell is also spokesperson for Concern America, an international refugee aid and development organization, Co-Chair Emeritus of the California Committee of Human Rights Watch and, occasionally, a Good Will Ambassador for the United Nations High Commissioner for Refugees. Known to millions as “B.J. Hunnicutt” of television’s historic “M*A*S*H” and from NBC-TV’s “Providence,” he is also a writer, director and producer.