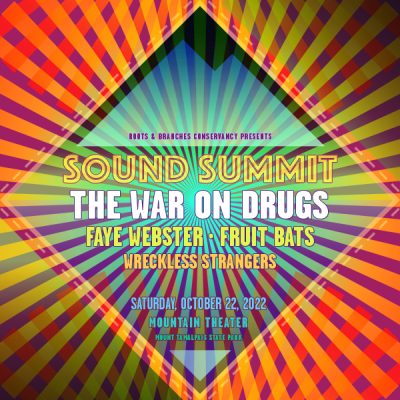 Sound Summit, a musical gathering like no other, returns for the daylong festival set on the slopes of Mt. Tam.

For more information and transportation tips, including shuttle, hiking, biking and driving, and an updated concert schedule, please visit our website.

DJ Andy Cabic of Vetiver fame will keep the groove going and spin tunes between sets.

High-spirited KNBR radio personalities Murph & Mac (aka Brian Murphy and Paul McCaffrey) will return as the day’s dynamic Masters of Ceremonies along with KPFA’s “Dead to the World” radio host Tim Lynch.

Sound Summit is as much a community spirit as it is a community event. The San Francisco Chronicle has called the festival “a day of restorative celebration.”

Produced as an annual celebration of and fundraiser for Mount Tamalpais State Park by Roots & Branches Conservancy, Sound Summit is staged at the historic Mountain Theater, a 4,000-seat natural stone amphitheater with stunning views of San Francisco Bay and beyond. Add a touch of Autumn glow, a resonant cause, and a stirring soundtrack, and you have a recipe for a memorable day in the late October light.