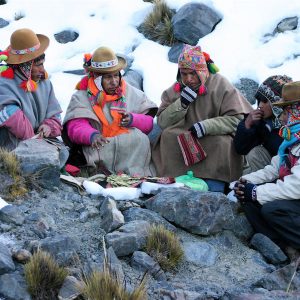 With Filmmaker Toby McLeod and and Corrina Gould

Standing on Sacred Ground is a four-part documentary series where native people share ecological wisdom and spiritual reverence while battling government megaprojects, consumer culture, and resource extraction as well as competing religions and climate change. This series exposes threats to native peoples’ health, livelihood, and cultural survival in eight communities around the world. Rare verité scenes of tribal life allow indigenous people to tell their own stories—and confront us with the ethical consequences of our culture of consumption.

Fire and Ice – From Ethiopia to Peru, indigenous customs protect biodiversity on sacred lands under pressure from religious conflicts and climate change. In the Gamo Highlands of Ethiopia, scientists confirm the benefits of traditional stewardship even as elders witness the decline of spiritual practices that have long protected trees, meadows and mountains. Tensions with evangelical Christians over a sacred meadow erupt into a riot. In the Peruvian Andes, the Q’eros, on a pilgrimage to a revered glacier, are driven from their ritual site by intolerant Catholics. Q’eros potato farmers face a more ominous foe: global warming is melting glaciers, their water source. Andes farmers, scientists and visiting Ethiopians struggle to adapt indigenous agriculture to the changing climate.

Further screenings of the Standing on Sacred Ground series are:
November 16