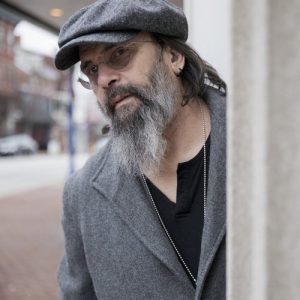 100% of proceeds to benefit Autistry Studios / with Lake Charlatans

Autistry Studios is a therapeutic/educational makerspace addressing the specific and individual needs of transition age autistic youth and adults in the areas of Education, Vocation, Life Skills, and Physical Fitness/Healthy Living. At Autistry we build independent adults!

More than forty years after breaking into the biz with Guy Clark, Steve Earle, just turned 64, no longer wears the cowboy hat that first got Guy’s attention. Townes van Zandt (subject of Earle’s 2009 Townes) and Guy Clark were “like Kerouac and Allen Ginsberg to me,” Steve says. The mercurial Van Zandt (1944-1997) who once ordered his teenage disciple to chain him to a tree in hopes that it would keep him from drinking, was the On The Road quicksilver of youth. Clark, 33 at the time Earle met him, was a longer lasting, more mellow burn.

“When it comes to mentors, I’m glad I had both,” Earle said. “If you asked Townes what’s it all about, he’d hand you a copy of Bury My Heart at Wounded Knee. If you asked Guy the same question, he’d take out a piece of paper and teach you how to diagram a song, what goes where. He was disciplined.”

“With GUY, however, there was this thing. When he was sick—he was dying really for the last ten years of his life—he asked me if we could write a song together. We should do it ‘for the grandkids,’ he said. Well, I don’t know…at the time, I still didn’t co-write much, then I got busy. Then Guy died and it was too late. That, I regret.”

Earle didn’t think making GUY paid off some debt, as if it really could. Like the Townes record, Guy is a saga of friendship, its ups and downs, what endures. It is lucky for us that Earle remembers and honors these things, because like old friends, GUY is a diamond.