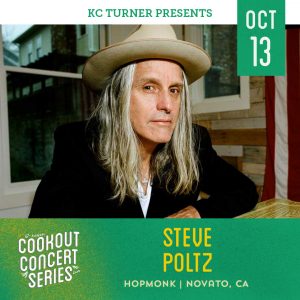 Throughout over three decades in music, Steve Poltz did it all and more—often shared by way of his rockin’ countrified folk slices of sardonic Americana (hatched in Halifax).

In 20 years since his full-length solo debut, One Left Shoe, he blessed the world’s ears with twelve solo records, spanning the acclaimed 2010 Dreamhouse and most recently Folk Singer in 2015. NPR summed it up best, “Critics and fans alike now regard Poltz as a talented and prolific songwriter.”

By 2016, he survived a stroke, endured anything the music industry could throw at him, and still performed like “280 days a year.”

However, he still never lived in Nashville, which represents a turning point in the story and the genesis of his 2018 Red House Records debut, Shine On…

“My girlfriend Sharon sold the condo we were living in, and I was ready to live in a van, which seemed like a good idea for one night—then I decided I wanted a kitchen and a closet,” he admits. “Sharon wanted to move to Nashville, because she thought it would be good for me. It caused a huge fight. … This makes me laugh now. As soon as I got to Nashville, I immediately knew I wanted to make a record in ‘Music City’.”

So, the man who once protested “I am San Diego” made Shine On in his new home of Nashville with one of its elder statesman behind the board, Will Kimbrough [Emmylou Harris, Rodney Crowell]. Holing up in the studio at Kimbrough’s house, nothing would be off limits. Together, they unlocked the kind of creative chemistry you only hear about in band bios—but for real.

In the end, for everything you can call him “searcher, smartass, movie freak, lover of technology, news junkie, baseball fan to nth degree, lapsed catholic who still believes in god even though all his friends are atheists and think he’s an idiot, and maker of fun,” you might just call Steve that little light in the dark we all need in this day and age.