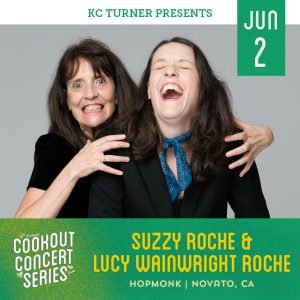 Have you ever wondered what it would be like to be in a band with your mother?

Suzzy Roche and Lucy Wainwright, a mother/daughter duo, have just released their first collaboration Fairytale and Myth, which won the VOX/POP INDEPENDENT MUSIC AWARDS for The Best Singer/Songwriter Award FOR 2014.

Suzzy Roche is a founding member of The Roches and Lucy (daughter of Loudon Wainwright, brother of Rufus and Martha) is known for her crystal clear voice, humorous stage presence and insightful, melodic songwriting.

Their show is a fun-filled evening of smart, thoughtful, songs with plenty of familial harmonies.