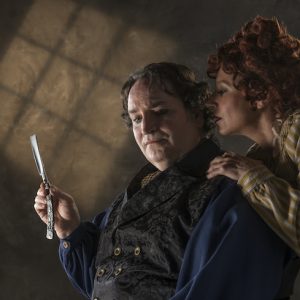 The Novato Theater Company’s second show of its 100th season is Sweeney Todd, a co-production with Theatre-at-Large.

This musical thriller, opening on October 25 and running until November 17, is directed by Kim Bromley and Bruce Vieira with musical direction by Judy Wiesen and choreography and movement by Marilyn Izdebski.

The musical with music and lyrics by Stephen Sondheim and book by Hugh Wheeler is based on the 1973 play Sweeney Todd: The Demon Barber of Fleet Street by Christopher Bond. Sweeney Todd opened on Broadway in 1979 and in the West End in 1980. It won the Tony Award for Best Musical and Olivier Award for Best New Musical.  It has since had numerous revivals as well as a film adaptation.

Tickets and subscriptions to the entire season are at NovatoTheaterCompany.Org or email.

Preview performance at 7:30pm on October 24