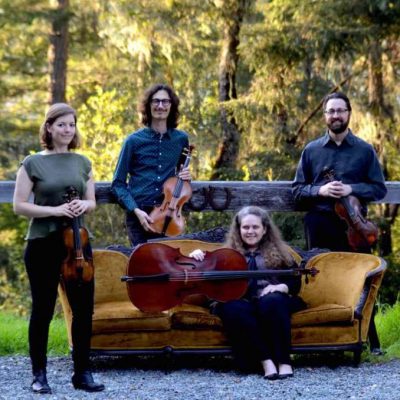 Help celebrate the release of their all-Fauré album, The Good Song

The historically informed Sylvestris Quartet, pianist Michael Seregow, and baritone Harry Baechtel join forces again after premiering their program The Good Song last season on MB Presents, and recording it in Seattle this past summer with a historic 1869 Erard piano!

This time, they’ll focus on English pastoral settings and chamber music from the World War I era by British composers Edward Elgar and Ralph Vaughan-Williams, and the American composer Samuel Barber.

The program centers around Barber’s cycle Dover Beach, a setting of a poem by Matthew Arnold depicting the “grating roar” of the waves, Vaughan-Williams’s On Wenlock Edge, a setting from parts of A. E. Housman’s A Shropshire Lad, and Elgar’s Piano Quintet in A minor, Op. 84, written at a country cottage in 1918, but said to be a processing of the horrors of “The Great War.” The program will also feature Barber’s famous Adagio from his string quartet, and short songs from the era.

Tickets available online or at the door.