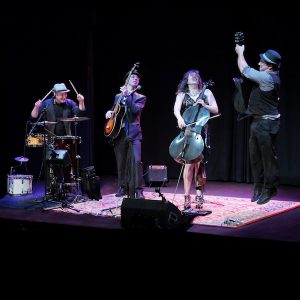 Each show is unique and features new music from Dirty Cello plus a different guest artist each time. The concerts are short and to the point with a total time of approximately hour and 15 minutes.

For the inaugural show, Dirty Cello will perform alongside Jesse Brewster, one of the leaders of the Marin County songwriter’s scene who will perform his gritty, Americana-based music that’s been described as honest, emotional, and full of authentic feeling.

The series’ host, the Dirty Cello band returns to Marin audiences as part of their busy schedule that sees them playing blues, bluegrass, and ‘60s rock all over the world from China to Hungary to Sopchoppy, Florida.  Described by Oakland Magazine: “Dirty Cello’s music is all over the map: funky, carnival, romantic, sexy, tangled, electric, fiercely rhythmic, and textured, and only occasionally classical.”

This series follows up on a variety of successful concert series in a variety of bizarre locales. Starting in 2014 with a concert series at the Garage consignment store in Fairfax, Dirty Cello has presented a set up concerts at a buffalo ranch on the Central Coast, a series in the Lafayette Public Library, crazy shows at a Nike Missile base in San Ramon, and a recently concluded series at the Museums of Sonoma County. 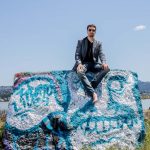