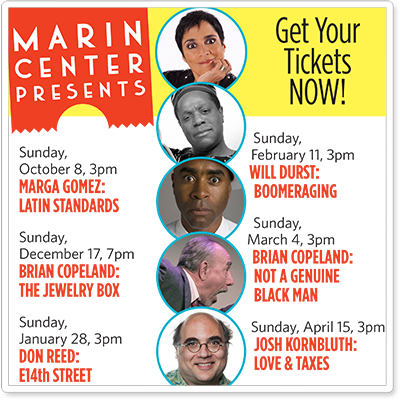 For the first time ever in Marin County, Brian Copeland presents Six of the Bay Area’s most critically-acclaimed, award-winning, and beloved solo shows for an exclusive run at Marin Center.

Dec. 17, 7pm:  BRIAN COPELAND: THE JEWELRY BOX
Two memorable weeks in his youth when six-year-old Brian took to the “mean streets” of Oakland to buy his mom the perfect Christmas gift.

Jan. 28, 3pm:  DON REED: E14th STREET
The first installment in Don Reed’s hilarious coming-of-age trilogy. Reed’s stepfather tried to force him to be a straight A, God-fearing teenager – but Reed wanted to be just like dear old Dad. Too bad he didn’t know dear old Dad was a pimp.

Feb. 11, 3pm:  WILL DURST: BOOMERAGING
An uproarious tribute to the joys, achievements, frustrations, and looming doom of the Baby Boom Generation. It’s what happens when acid flashbacks meet dementia.

March 4, 3pm:  BRIAN COPELAND: NOT A GENUINE BLACK MAN
When eight-year-old Copeland and his African-American family moved into San Leandro, considered one of the most racist suburbs in America.