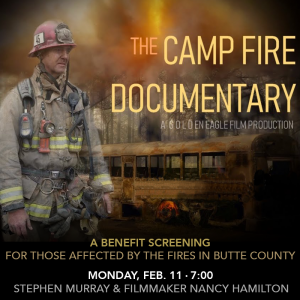 A special benefit screening of the documentary about the recent wildfire

The Camp Fire tells the story of Stephen Murray, a 31-year resident of Paradise, and a father of two young children, who single-handedly rescued more than 60 senior citizens from a burning mobile home community.

Filmmaker Nancy Hamilton compiled a substantial portion of her film from cell phone footage of the catastrophic fire.

Following the screening, Hamilton and Murray will participate in an onstage conversation with the moderator Paul Liberatore and the audience.

Net proceeds will go to Community Heroes, to support people in Butte County affected by the fire.