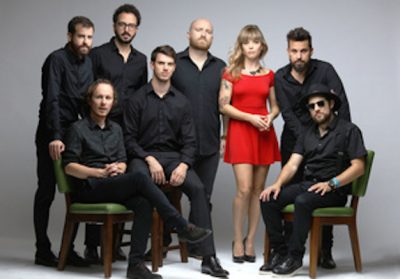 Bluegrass. Swing. Hot jazz. Pre-war blues. Southern soul. New Orleans funk. The Dustbowl Revival is what you could call an American roots orchestra with eight full-time members — and they play it all, mashing the sounds of traditional American music into a genre-hopping, time-bending dance party that coaxes new fire out of familiar coal. This isn’t a throwback band. It’s a celebration of the sounds that have kept America moving for more than a century, performed with all the flair of a medicine show and rooted in the sweat and swagger of a juke joint song swap.

With A Lampshade On, the Dustbowl Revival’s fourth album, finally shines a light on the band’s strength as a live act. They formed in L.A.’s bohemian enclave of Venice Beach in late 2007, the result of a hopeful Craigslist ad posted by bandleader Zach Lupetin, a Midwestern transplant who hoped to join together players in the string band and brass band traditions. Since then, one thing has become clear as the group grows more confident in their abilities: Dustbowl does its best work onstage. They’ve played dive bars, saloons and theaters, front porches and festivals. To watch them onstage is to take part in an evolving conversation between an orchestra and audience. The horns blast, the fiddle and mandolin swoon, and the howling vocals — which Lupetin shares with Liz Beebe — rattle off stories about preachers, drinkers, lovers, and holy rollers. The crowd is encouraged to participate, of course…and the crowd often does during With A Lampshade On, whether it’s singing along during the call-and-response verses of 1930s drinking song “Whiskey in the Well” or shouting their approval during Beebe’s bawdy, ballsy original “Doubling Down on You.”

A good chunk of this album was indeed recorded live, with many songs taken from a pair of electric concerts at the Great American Music Hall in San Francisco and the Troubadour in Los Angeles. The point wasn’t to release a live album, though. It was to capture a group of road warriors in their element, playing not to an audience, but with an audience. Noted L.A. live sound expert Alex Chaloff rigged up to twenty microphones to capture the group from every angle, and the sound is remarkably clean and warm. The album tracks that weren’t curated from those two shows were recorded during live studio sessions in New York, with everyone in the band playing at once. It’s raw, close and sweaty, and you can hear every breath.

“It’s just us in a room, stripped down to the essentials and rocking out,” says Lupetin. “We wanted to make an album that unleashed that original joy of American roots music, which is a uniquely high-energy, joyful thing that jazz and folk music have both created.”

With A Lampshade On makes itself at home right at the crossroads of American jazz and folk traditions. Over the last few years, the band has steadily gained recognition while playing festivals and venues across North America and Europe, notably with Lake Street Dive, Trombone Shorty, Rebirth Brass Band and the Preservation Hall Jazz Band. Their video for their new single, “Never Had To Go,” was was shot with a new friend of the band: the legendary actor Dick Van Dyke. While their previous studio albums had more of an old-time feel, this new album has a more funky, soulful, let-loose flavor.

Years ago, the Dustbowl Revival witnessed the Preservation Hall Jazz Band merging with Del McCoury’s seasoned bluegrass troupe from Nashville in a series of concerts. It was like a flashbulb going off. That’s the secret ingredient in the Dustbowl Revival’s sound: the bridge connecting two American genres that grew out of places more similar and entwined than people realize, but have grown apart during the century or so since they first became popular. Preservation Hall and the Grand Ole Opry rarely get mentioned in the same sentence.With A Lampshade On reunites these estranged folk traditions with songs that rely as heavily on bluegrass trombone breaks and jazz mandolin runs as funk fiddle solos and gospel sing-alongs.

That unique middle ground — the place where jazz, folk, gospel and blues all intersect — is where With A Lampshade On shines brightest. With this album, the Dustbowl Revival isn’t just paying tribute to the sounds of decades long sine past. Rather, the band is participating in the evolution of American roots music, tipping a hat to what’s come before while looking ahead to what’s on the horizon.

Quiles & Cloud‘s sound has struck a chord with audiences all over the country. Folk Alley has lauded the group’s “continued ability to combine subtle precision with stark grit and creative exploration.” Acoustic Guitar has called them “a compelling new voice on the Americana scene.” Quiles & Cloud have now played hundreds of shows, won the 2014 FreshGrass Duo Award, and caught the attention of Grammy Award-winning banjo player Alison Brown – who produced their third album, which comes out on Compass Records in Spring 2017.