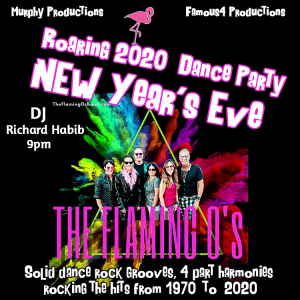 A ROARING 2020 Dance Party will get the new decade rocking and rolling for party savvy celebrants at the Mill Valley Community Center this New Year’s Eve.

Join with neighbors and friends and welcome in the future.

About the Band:
The Flaming O’s play today’s hits and yesterdays classics seamlessly going from a Journey tune to a Katy Perry tune, from Adele to Bon Jovi,  Bruno Mars to Led Zeppelin, from Pink to Queen.  They play solid dance-rock grooves, sing honest to goodness four-part harmonies, and explode with real rock energy to hits of the 70s, 80s, 90s, and Today.

Getting the party started at 9 pm is Mill Valleys’ own DJ Richard Habib.

Lauren Mayer just added to the bill with The Flaming O’s headlining. ​Laugh-out the old and laugh-in the New Year with Lauren ‘s Progressive Parodies and Hilarious Holiday Songs.  ​Her songs cover politics, suburban life, parenthood, and singalong songs from her Latkes, Schmatkes album. Lauren’s weekly YouTube videos have millions of views and almost as many trolls. ​Her motto: “If you can laugh at it, you can deal with it”

YES there will be complimentary party favors and even prizes for Best Dressed individual and couple complements of Larry the Hat of Famous4.