The Inbetweens · EWEB · Everything 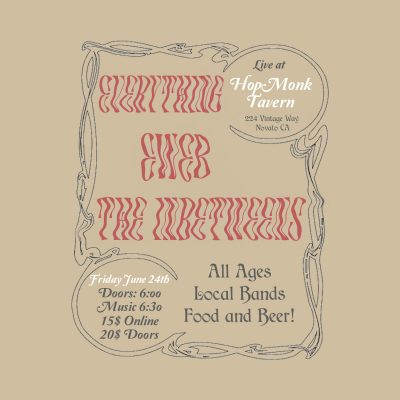 An evening of alt-rock and contemporary psychedelia

The Inbetweens | EWEB | Everything

Alt-Rock from SF’s North Bay
The San Francisco Bay Area’s punk roots and psychedelic wiggles find their respective place in San Rafael’s premier homegrown rock group. Started in the formative years of high school by frontman Aidan Reese and Drummer/Producer Frank Lookinland, The Inbetweens remain an auditory staple for much of the Northbay’s underground music scene. With hits like “Glasses” and “Dumbing Down” making their way onto various indie playlists since their release. The band now looks at the post Covid-19 world with inspiration and opportunity.

EWEB:
Formed from an equal appreciation for old-school prog rock and contemporary psychedelia, EWEB’s music is as mercurial as it is infectious. EWEB was conceived in early 2021 by Jack Carek, guitar and vocals; Sam Mondros, guitar and vocals; Ben Sickler, drums; and Tate Iverson, Bass.

The four met at the University of Oregon and started playing shows supporting Carek’s Debut solo release, Through the Door. After writing an album’s worth of material in a concentrated six months, the group now plays shows across the Pacific Northwest. With interplay that mechanizes only by way of bombastic drumming and melodic basslines, EWEB yields full control over their claustrophobic jams, often evening out into melodic composed sections.

The music is an eclectic blend of pop, funk, rock, Americana, and soul, and it carries the message of what is universal about music. Aspiration. Movement. Elevation. Unity. It comes through in the lyrics and it embodies the experience.  Really, it’s all about the Love.