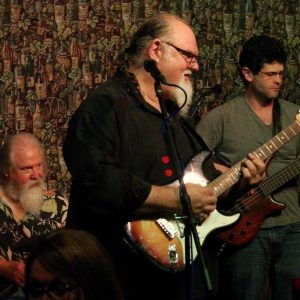 The Jones Gang performs Rock, Funk, Blues, and Americana for Free in the Park

The Jones Gang (formerly Houston Jones) is like a VW van with 310,000 miles rolling out of the shop, here they are, still trucking.

A collection of misfits and malcontents who, like a hippy transformer, assemble into something much greater than the sum of its parts.

An insane collection of rock, funk (Motown and Louisiana), gospel, blues, folk and country. The band covers a musical history the size of the USA, all this and more in a tight and soulful style. The gang can move seamlessly from a murder ballad to a New Orleans rhumba, first breaking your heart and then making you glad you’re alive.

Travis Jones, the soul mountain, is the lead singer with a voice for the ages. Henry Salvia, the motor city misfit, plays more notes than exist on the piano. Josh Zucker is the strong and solid base and bass of the band, and Peter Tucker, is of course the best Peter-Tucker-style drummer in the world, and the only drummer officially approved by the northern California bluegrass society. Sean Allen from Napa is truly the master of the Telecaster.

Their CD, “No Turning Back” is receiving rave reviews!