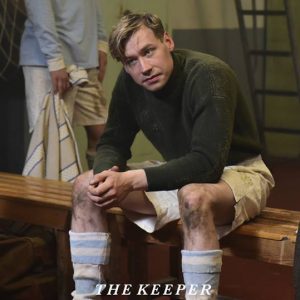 This event is postponed – we will be in touch with a reschedule date.

This epic film opens during the war, as the Luftwaffe bombs England, and Trautmann, a paratrooper for the Third Reich, is captured along the Eastern front.

Transported to England, he begins to reexamine his allegiances when he is forced to watch films of recently freed concentration camp survivors.

When he is put to work in a nearby town, he reluctantly plays goalkeeper for the local team, then falls in love with the coach’s daughter.

But just when the movie risks descending into a predictable love story, the tale takes several shocking turns. Trautmann’s signing causes outrage among thousands of Manchester fans, many of them Jewish. But support comes from an unexpected direction: Rabbi Altmann, a Manchester fan who fled the Nazis, publishes an open letter opposing the campaign against Bert.

Ultimately the film does not shy away from the complicated nature of Trautmann’s story. On the contrary, as a central part of its appeal, it raises tough questions about forgiveness, forgetting and the power of sports to (re)unite.
– Emily Kaiser Thelin

The San Francisco Jewish Film Festival is the first and largest Jewish film festival in the world. Presenting innovative film each summer in the Bay Area, the festival promotes awareness, appreciation and pride in the diversity of the Jewish people. Festival programs are meant to create community and strengthen consciousness of Jewish identity, history and culture; provide a dynamic and inclusive forum for exploration of and dialogue about the Jewish experience; and encourage independent filmmakers working with Jewish themes.