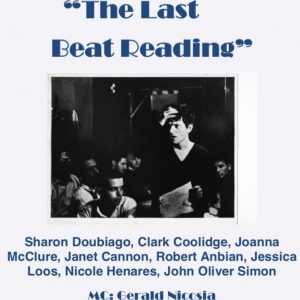 Gerald Nicosia hosts: with Clark Coolidge, Joanna McClure from Kerouac’s novel Big Sur, award-winning poet Sharon Doubiago who has been called “the female Kerouac,” and many more plus live music.

Music performed with poetry by guitarist Dana Alberts, one of the founders of the 70’s Punk scene in San Francisco, and bop saxophonist Phil Deal, who played behind Allen Ginsberg, Jack Micheline, etc.