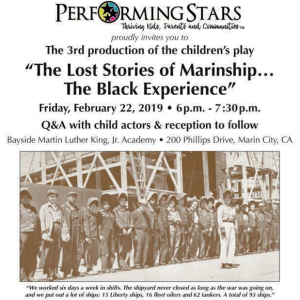 Performing Stars proudly invites you to our Black History Month Celebration to share the true oral stories of Marin City residents, with The Lost Stories of Marinship…The Black Experience.

This original play written in 2006 is based on true oral histories of the black families who migrated from the South to work in the Marinship, a Sausalito shipyard built during World War II.

It is a dramatic documentary performed by children ages 8 to 12 with humor, dance and music that celebrates the people, most of them poor, who left their homes to help their country and became the founders of Marin City.

The play reaches back more than 75 years through the memories of those who were there to bring to life a different time, when the nation was hurriedly trying to assemble the necessities to fight a war in Europe and the Pacific.

Our young children have been rehearsing since October and there will be three performances:

We look forward to seeing you at the performances. 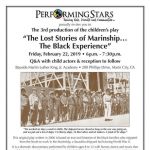