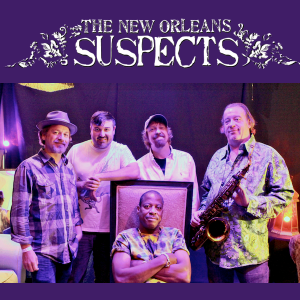 It’s been said that the musicians of New Orleans are all members of one gigantic band that breaks up into smaller groups on a nightly basis.

If this were really the case, The New Orleans Suspects would be in a class all their own.

The group is comprised of musicians with experience and versatility that rival any other band that the city has ever produced.

“Mean” Willie Green has been the drummer for the Neville Brothers band since the 1980s.

Reggie Scanlan‘s career has been defined by his thirty-three years playing bass in the Radiators, the longest running rock act in the history of New Orleans.

Jake Eckert is the sterling-toned lead guitarist in the Dirty Dozen Brass Band.

CR Gruver is a classically trained pianist who was bitten by the bug known as New Orleans music after stints touring with nationally known bands such as Outformation and the Atlanta-based singer/songwriter Angie Aparo.

Kevin Harris is a founding member of the Dirty Dozen Brass Band. His tenor saxophone work has graced recordings across the gamut from pop stars Elvis Costello, Dave Matthews and the Black Crowes to zydeco legend Buckwheat Zydeco, jazz songstress Norah Jones, and Modest Mouse, Widespread Panic and many more.

Together these five musicians create music that is firmly rooted in the modern New Orleans sound with compelling originals and tasteful covers.