The Purple Ones - Insatiable Tribute to Prince 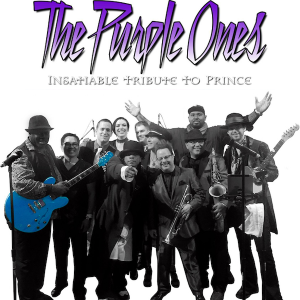 The greatest Prince tribute on the planet!

His name was Prince. And he was funky!

Oakland California’s The Purple Ones treat the music and patented vibe of Prince with the utmost respect, capturing the essence of what it was like to see Prince live. The musical dexterity of The Purple Ones – with 11 pieces on stage including a full horn section – completely turns the concept of a Prince tribute band on its head, delivering Prince’s material live onstage in a way that has to be experienced to be believed.

Not a typical tribute band with a Prince lookalike or impersonator, The Purple Ones bring audiences to their feet, night after night, by speaking Prince’s musical language: energy, rhythm, creativity and of course…a serious dose of unadulterated funk. The Purple Ones tap into that soulful artistry like none other.

The Purple Ones is a labor of love that was born in 2012 when Bay Area based bandleader and founder, Morty Okin decided to focus all of his energy on building the greatest Prince tribute on the planet.

The Musical Director is Prince’s former Musical Director, bassist/guitarist and co-founder of Prince’s “New Power Generation,” Levi Seacer Jr. (1986-1993), later collaborating with Prince as a songwriter and Co-Producer on his projects.

In the wake of Prince’s untimely passing, this group of funky pros are more determined than ever to honor his past by playing his hits, B-sides and deep cuts live in a world class show that is, in the words of Prince himself, “nothin’ but a party!’