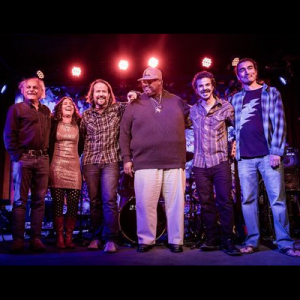 The Rock Collection is an all-star songwriting and performing collaboration with an amazing chemistry onstage.

They’re among the most accomplished instrumentalists, singers and songwriters on the jamband circuit. Performing original songs by Melvin, Greg (with co-writer Robert Hunter), Lebo and Stu… with some choice cover-tunes… a Rock Collection concert includes extended improvisation, four-part harmonies, and dynamics that go from delicate ballads to blow-the-roof-off rock and roll.

We are pleased to announce Stephanie Salva has joined the band. Best known for her roles in the beloved SF North Bay bands Jug Dealers and The THUGZ, Stephanie Salva has been rocking the West Coast music scene in various groups for the last decade, including her most recent project, Tumbleweed Soul. With a voice that reflects her Detroit and Chicago roots, she brings an element of soul and authenticity that continues to push her career to new heights.