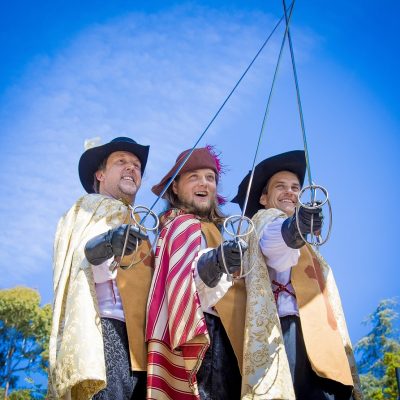 Marin Shakespeare Company presents “The Three Musketeers,” Ken Ludwig’s adaptation of the classic novel by Alexander Dumas is a comic, swashbuckling adventure for all ages.

WHAT: “The Three Musketeers”
Directed by Robert Currier
By Ken Ludwig / Adapted from the novel by Alexander Dumas

Ken Ludwig’s adaptation of the classic novel by Alexander Dumas is a comic, swashbuckling adventure for all ages. This new version introduces Sabine, D’Artagnan’s sister. Posing as a man, Sabine is entangled in the adventures of D’Artagnan and his misfit Musketeers as they fight foes and defend the honor of their Queen. Robert Currier directs this production starring Jonah Robinson as D’Artagnan and Elena Wright as Milady and featuring fight direction by Richard Pallaziol.

Audiences are encouraged to bring picnics or purchase snacks at the Theatre Cafe. Warm clothing, jackets and blankets are recommended for evening performances. Parking is free.

Free pre-show and post-show conversations with a company artist or scholar are presented on select performance dates. Shakespeare Dinners are presented at 6:30 p.m. on select Saturdays for an additional $35 for a gourmet picnic and intimate pre-show talk. Wine, beer and soft drinks are available for sale, or bring your own. Shakespeare Dinner reservations are required at least two hours in advance.

COST:     $10 to $37
Admission at the door is $37 general; $34 senior; and $12 youth (25 and under). Preview performances are $15 general and seniors; $10 youth. "Pay Your Age" is offered to audience members between the ages of 26 and 34 when purchasing tickets at the Box Office on the day of any performance, with valid identification. Marin Shakespeare Company also offers those 65 and over half-price tickets at Senior Matinees and those ages 18 and under admitted free at Family Matinee performances.