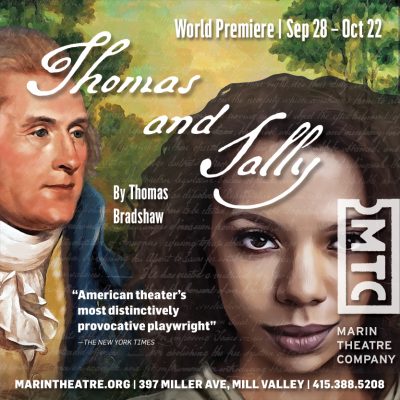 An explosive world premiere by 2017 PEN Award-winner Thomas Bradshaw, Thomas and Sally gets up close and personal with founding father Thomas Jefferson and Sally Hemings, the enslaved woman who mothered six of his children. Bradshaw takes us behind the scenes—and into the beds—of American history with the Hemings-Jeffersons and the rock stars of the Revolution: Ben Franklin, John & Abigail Adams & the Marquis de Lafayette.

Pre-Show Discussions: Join members of MTC’s artistic staff and cast of the show to discuss the play, playwright and play’s themes on Wednesdays before the 7:30pm performances.

After Words: Join a member of MTC’s artistic staff (often with one or more members of the cast) for a Q&A talkback after every performance, except Saturday evenings and Opening and Closing Nights.

MTC After Hours: Following the performance on Saturday, Oct 14, join members of the audience and cast in the lobby to continue the conversation. Featuring music and drink specials.

Discounts for seniors, teens, military families, Bay Area teachers and groups of 7 or more are available. Contact the Box Office for more details.