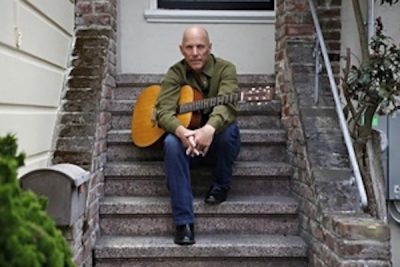 He is one of the enduring hard men of professional sports, logging 34 of his 55 years with professional baseball. Of those years, he has spent a jaw-dropping 25 on the hallowed fields of the Major Leagues as both a hard-charging player and a steely-eyed field general. He has been to the World Series four times- once as a player and three times as a coach, finally wrapping his battered, dusty hands around the World Series Trophy in 2010…and yet again in 2012 and 2014. Impressive credentials for any man, but here’s the thing- baseball is only a part of his story.
He is also a prolific and talented songwriter. That’s right- this ferociously hard-working baseball legend is also an award-nominated musician who regularly packs venues across the globe. He is a seasoned fingerstyle legend of Americana music with a gift for crafting potent, resonant songs and delivering energetic, emotional live shows.
His name is Tim Flannery and he is writing some of the most gorgeous acoustic music to roll out of California since the halcyon days of the Seventies folk explosion.
“Flan,” as he’s known to family, friends and players, started playing baseball as a kid and its hold on him has never loosened. As a player for his hometown San Diego Padres, each season would begin with Tim’s manager cautioning him that his position would likely go to someone younger, faster or more gifted. A warrior to the core, Flan distilled such negativity into furious motivation, out-running, out-gunning and out-hustling every guy on the team to secure his spot on the roster. Unsurprisingly, his relentless work ethic and fearless playing style made him a fan favorite and to this day, he is a much-beloved icon from the surf breaks of Oceanside, California to the furthest tip of Mexico’s Baja Peninsula.
When his playing career came to a close, Flan took to coaching with the same passion and savvy that propelled him to such auspicious heights as a player. He moved from the minor league system back into the Majors as a third base coach for the Padres, and in 2008 he took over third base coaching duties for the San Francisco Giants, where he patrolled the left side of the field like a wolf, managing the team’s offensive attack with equal measures of strategy and pure guts. Flan announced his retirement from baseball shortly after the San Francisco Giants earned their third World Series championship in 5 years.
Tim has spent the majority of his life on the road, balancing his career and his creative drive with the love of his wife and three children. His music explores the depths of emotion that only loneliness and solitude can reveal, as well as the profound emotional highs unlocked in a golden surfing session or in the majesty of a star-spangled sky from a back porch in Kentucky.
Flan’s music enjoys radio support across the planet, from the shores of Ireland to beach towns up and down the California coast. He is routinely supported by an obscenely talented band and he has been joined onstage by the likes of Jackson Browne, Bruce Hornsby, Garth Brooks and Jimmy Buffet. With a voice as smooth as Kentucky bourbon and heart worn on both sleeves, Flan’s concerts ebb and flow with brilliant melodies, soaring harmonies and themes of love, travel and connecting with the Great Spirit. And of course, he sings about baseball.

Few among us could distill our essence with such elegant simplicity. We want to deconstruct every line for deeper meaning, but there is no need. What Keith Greeninger brings to music, and life for that matter, is authenticity. As a result, there are no barriers between Keith, his music and his audience. This bond stems from Keith’s underlying philosophy that music is first and foremost a gift and a medicine to take part in together.

As a singer-songwriter, Keith paints intricate portraits of the human condition with powerful melodic images, deep engaging guitar rhythms and husky, heart-wrenching vocals. His masterfully crafted tunes and powerful presence have earned him the top songwriting awards at the prestigious Telluride Blue Grass Festival, The Kerrville Folk Festival and The Napa Valley Folk Festival. Keith has toured the national Folk and Americana circuit extensively for over two decades. He’s performed at festivals and legendary venues, appeared on countless national radio shows, and shared stages with dozens of the country’s best-known artists. Keith’s records and personal appearances have garnered him a legion of devoted fans, and the respect, admiration and appreciation of music critics far and wide.

A fourth generation Northern Californian, Keith grew up at the edge of a rich agricultural region, fondly known as the ‘Valley of Hearts Delight.’ The Santa Clara Valley was quilted with fruit tree orchards and vast open fields – perfect inspiration for a budding vagabond singer-songwriter.